This Assembly Manual contains the information required for the correct assembly of this Yamaha bicycle prior to delivery to the customer. Since some external parts of the bicycle have been removed at the Yamaha factory for the convenience of packing, assembly by the Yamaha dealer is required. No adjustment of the power unit mechanism, which plays the most important part in riding, is necessary because it has been adjusted at the factory before shipping. It should be noted that the assembled bicycle should be thoroughly cleaned, checked, and adjusted prior to delivery to the customer.

The service specifications given in this assembly manual are based on the model as manufactured. Yamaha Motor Company, Ltd. is continually striving to improve all of its models. Modifications and significant changes in specifications or procedures will be forwarded to all authorized Yamaha dealers and will appear in future editions of this manual where applicable. The procedures below are described in the order that the procedures are carried out correctly and completely. Failure to do so can result in poor performance and possible harm to the bicycle and/or rider.

Particularly important information is distinguished in this manual by the following notations.

This is the safety alert symbol. It is used to alert you to potential personal injury hazards. Obey all safety messages that follow this symbol to avoid possible injury or death.

A WARNING indicates a hazardous situation which, if not avoided, could result in death or serious injury.

A NOTICE indicates special precautions that must be taken to avoid damage to the bicycle or other property. 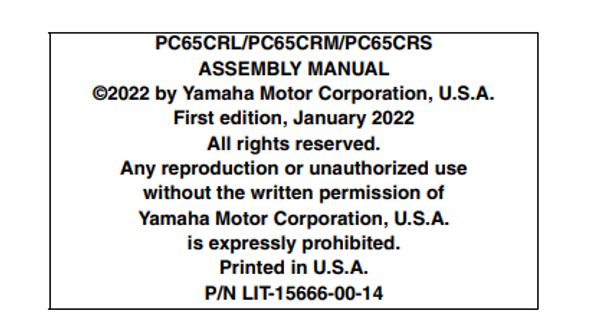 Do not use a cutter, scissors, or other sharp object to open the part boxes; otherwise, the included parts could be damaged.

Wear suitable protective gear such as gloves when handling and opening the part boxes. 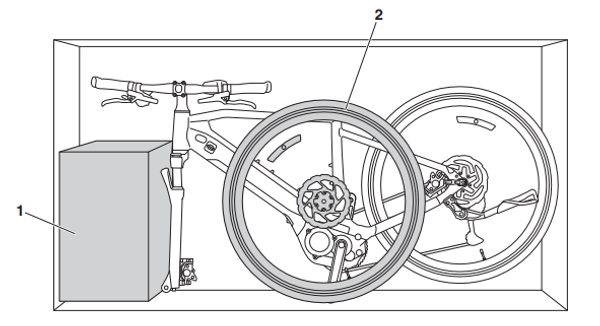 The parts listed as follows are included*. Check the parts and their quantities before starting assembly 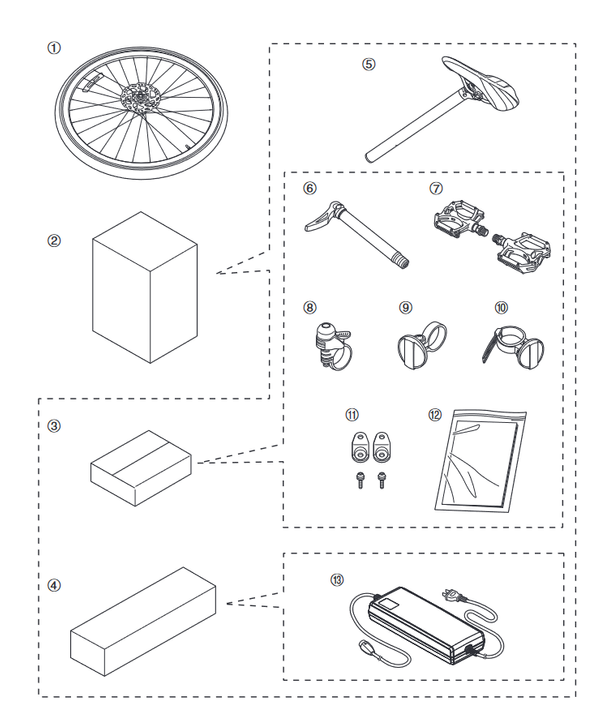 Charge the battery pack following the instructions in the owner’s manual before starting installation. 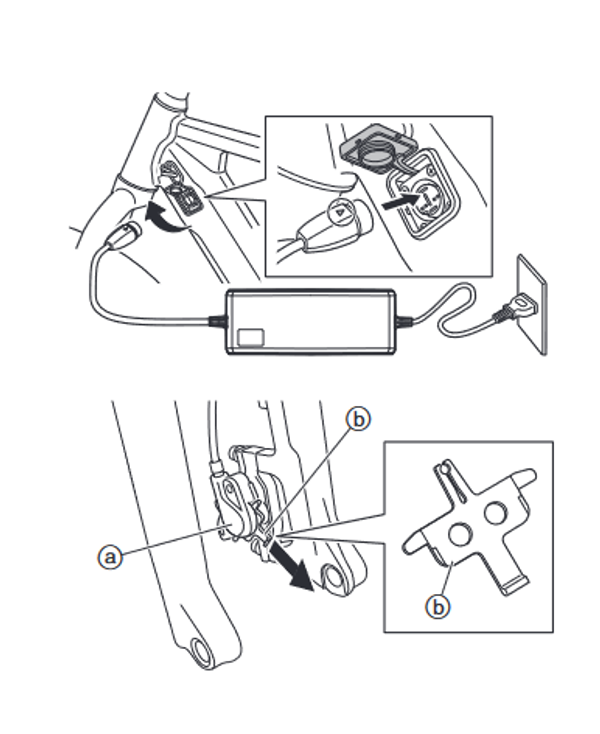 1. Installing the front wheel and fork end
Remove the spacer (b) from the front disc caliper (a). Give the removed spacer (b) to the customer, explaining how it is used. 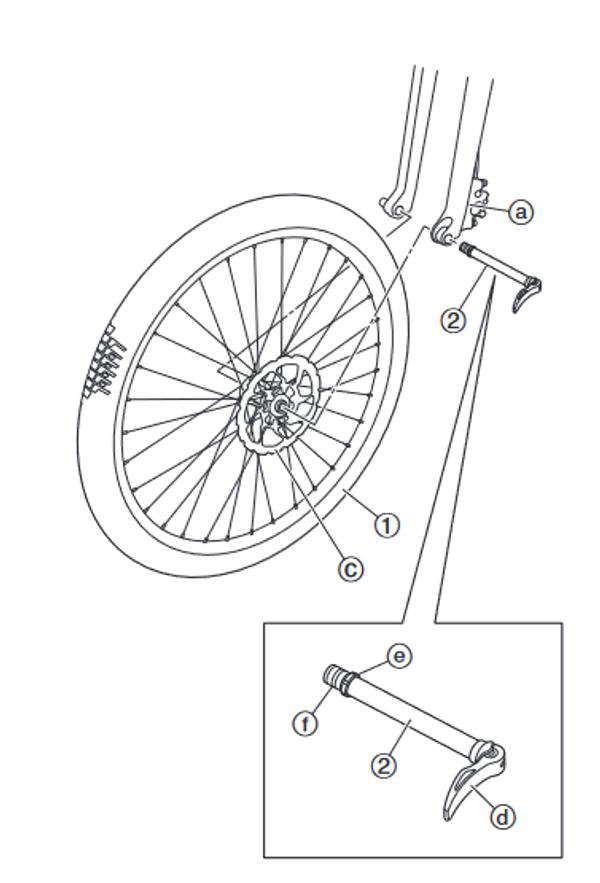 -Even if the collar (e) of the front axle (2) is inserted with the collar open, it will close when pressed in.
-When the collar (e) is closed, turn the nut (f) approximately 1/8 turn counterclockwise while keeping it pressed in; the collar will then open.

Check that the collar (e) of the front axle (2) goes through the hole in the right side of the fork end and that the collar is actually open. Turn the nut (f) while keeping it pressed to prevent the lever (d) from turning, and tighten it until there is (a) little resistance. Move the lever d of the front axle 2 to “OPEN” facing the notch (e). With the lever (d) caught in the notch (e), turn and tighten until there is a little resistance in the lever. 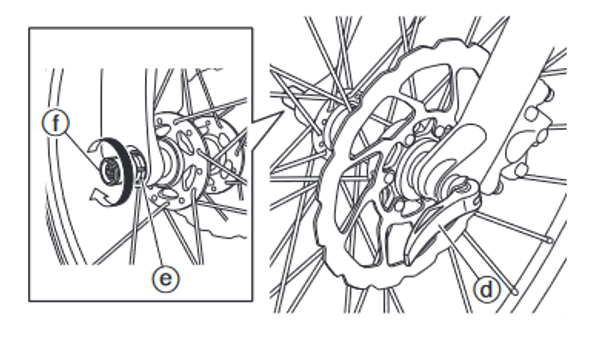 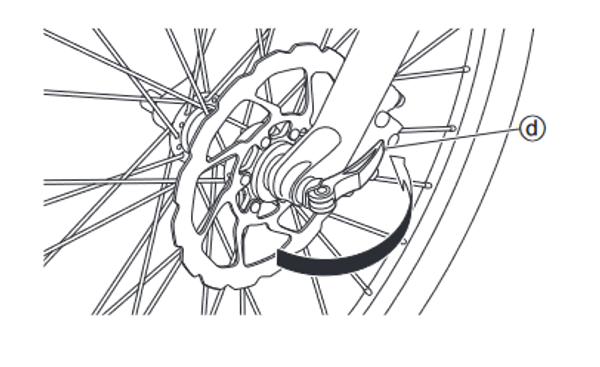 Position the lever when it cannot touch obstacles while the bicycle is moving. If not, the lever could be unlocked unexpectedly, causing the front wheel to come off, resulting in an accident with severe injury or death.

Fasten the lever (d) facing backward from the direction of travel in such a way that it cannot easily touch obstacles that might be encountered while riding. 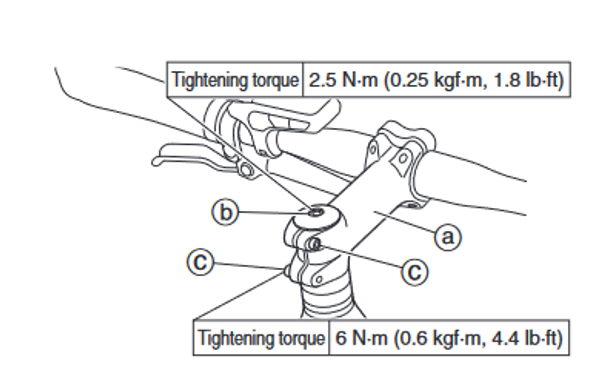 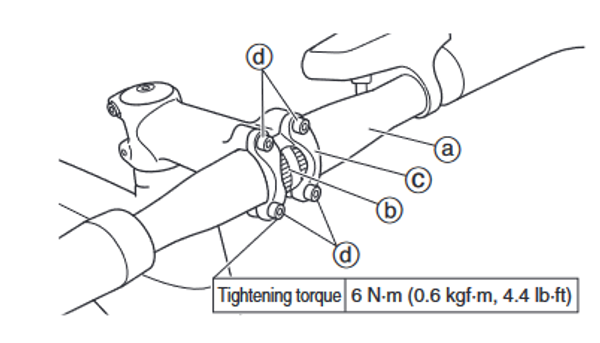 The handlebar (a) should not touch the frame when it is turned fully to the left or right.

Install the handlebar (a) so that the brake levers (e) are at a 45 degree angle to the handlebar, as shown in the illustration. 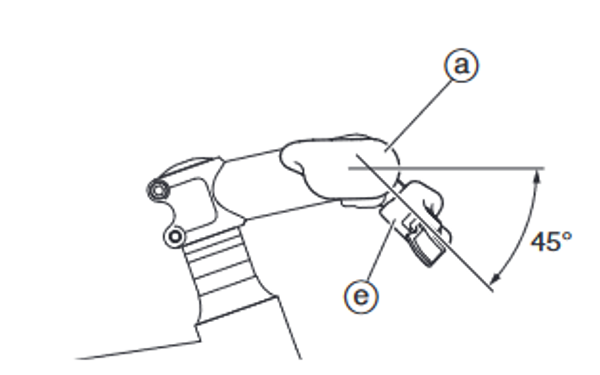 -Tighten bolts (d) evenly in stages, in the order shown in the illustration.
-Tighten in such a way that the gaps (f) above and below the handlebar holder (c) are equal. 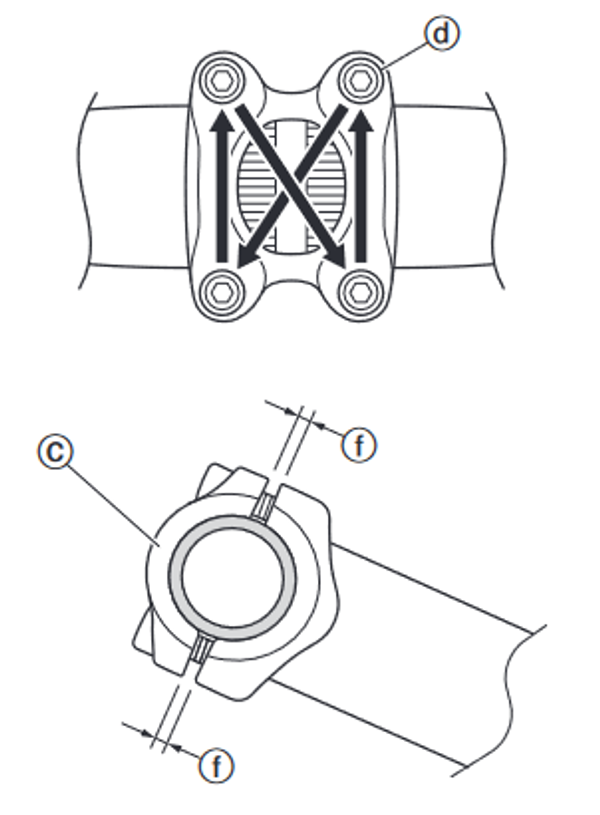 Install the display unit (a) so that it is at a 30 degree angle as shown. 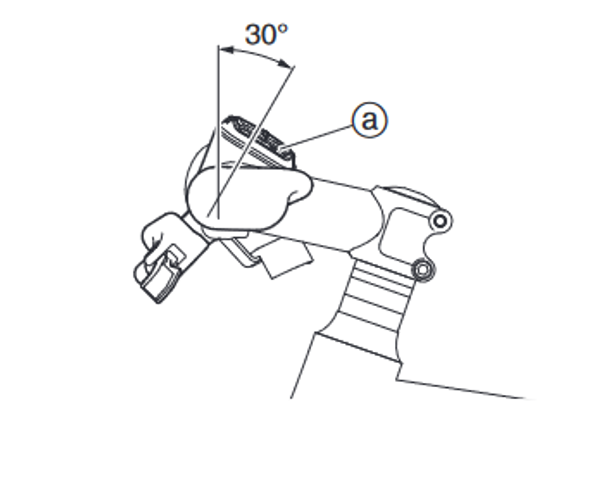 5. Installing the headlight
Install the headlight (a) to the bracket (b) as shown, then tighten the bolt (c) to the specified torque. 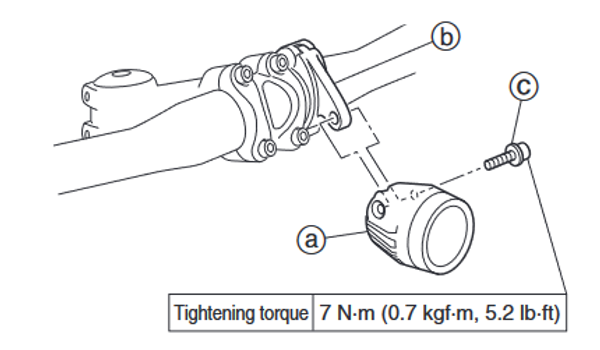 Install in such a way that the headlight points downward from horizontal and shines on the road approximately 33 feet (10 meters) ahead.

7. Installing the bell
Install the bell (1) in the position (a) shown, then tighten it with the screw (2). 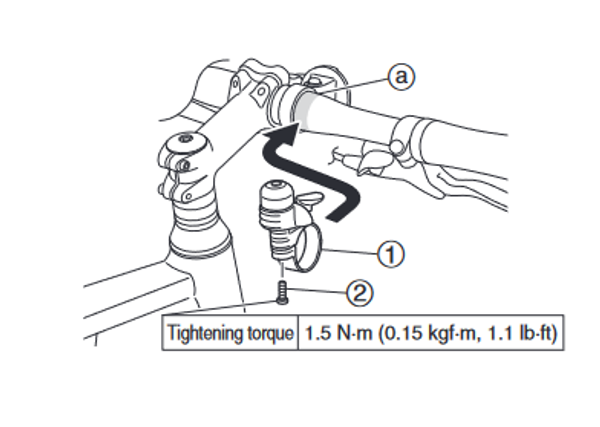 Be sure to route the wires as shown in the illustration. If not, they could interfere with handlebar operation which could cause loss of control. 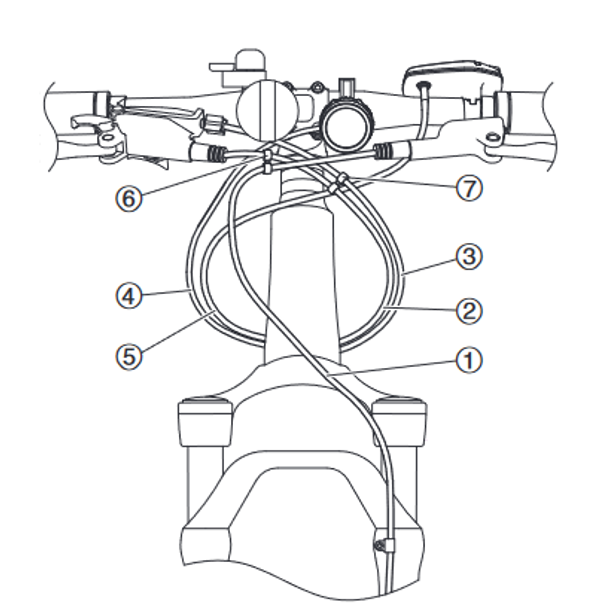 Fasten the headlight lead (4), and display unit lead (5) with the plastic locking tie (8), and then make sure that they are routed as shown. 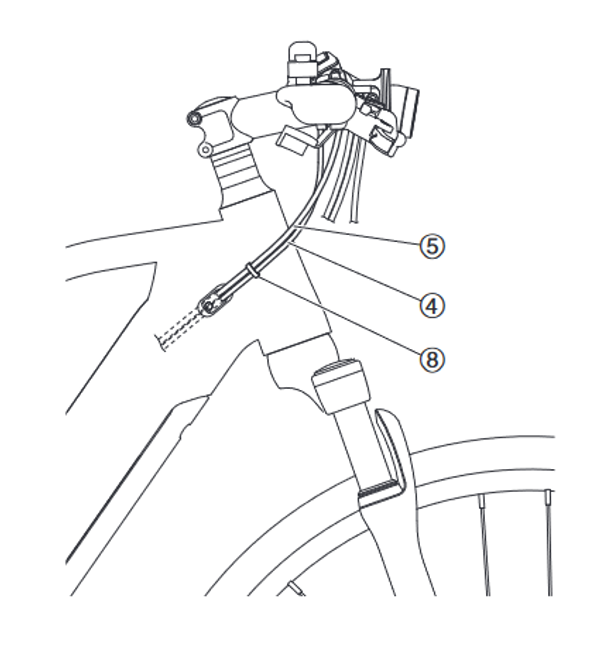 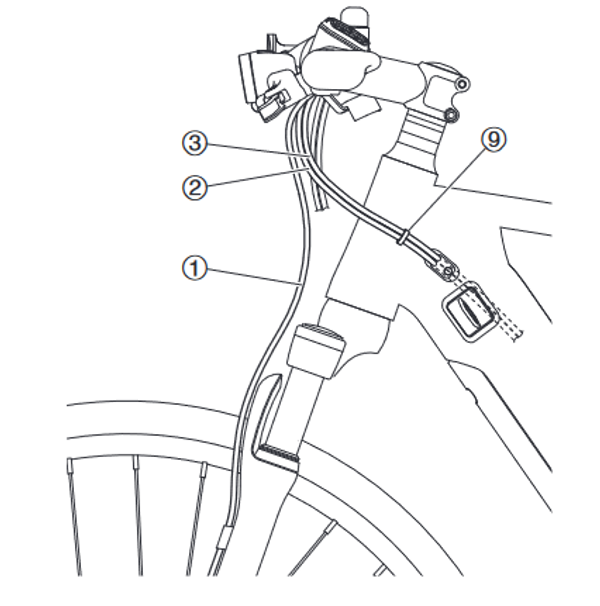 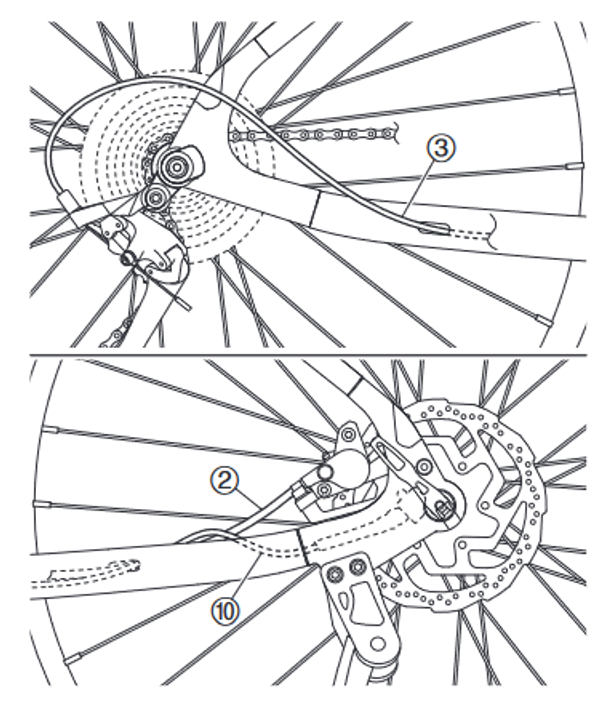 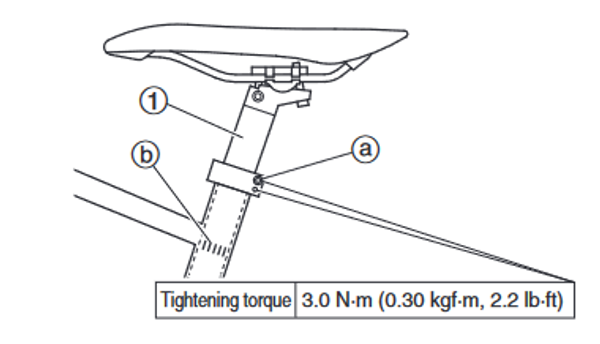 Insert the saddle and seat post (1), then tighten the bolt (a) to the specified torque. 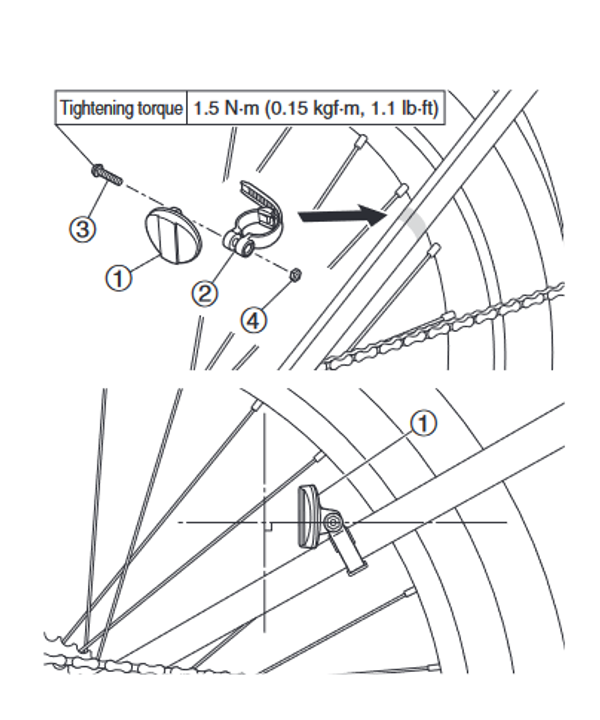 11. Installing the pedals
Install the pedals (1) to the crank (a), then tighten to the specified torque. 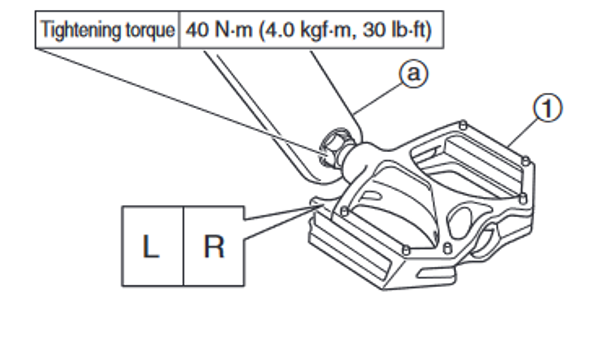 12. Checking the operation of the speed sensor
A. Press the power button (a) to turn on the power.
B. Long-push the power button a for approximately 10 seconds within 30 seconds after power-on, make sure that the display changes to the self-diagnosis display (b), and then release the power button (a).
C. Change the option (e) by using either the assist up button (c) or the assist down button (d) until “-1-” is displayed.
D. Long-push the assist down button (d) for at least 2 seconds, and then release the button to confirm.
E. Make sure that the speedometer (f) is displayed and that the mode has been switched to the speed sensor confirmation mode.
F. The number displayed on the speedometer (f) counts up when the rear wheel is lifted off the ground and turned. The number increases by 1 for 1 turn. Check that the position of the wheel at which the display counts up is stable.
G. After checking the operation, press the power button (a) to quit. 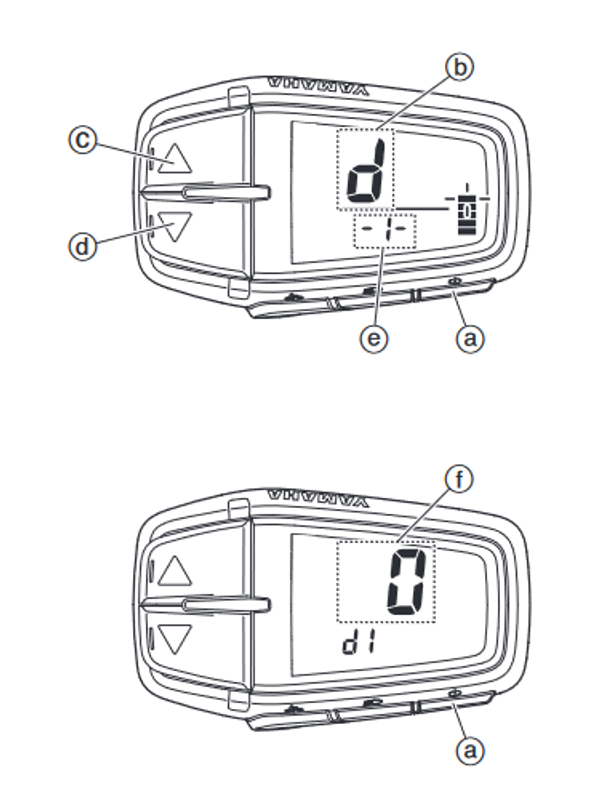 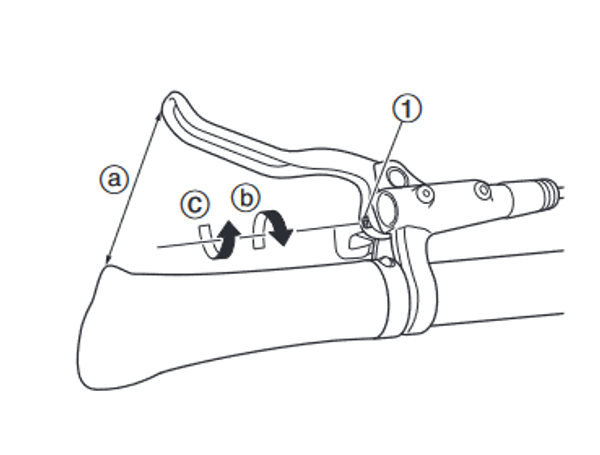 After adjusting the brake lever opening, check that the rotation of the front and rear wheels is not heavy.

Adjust to a position at which it is easy for the customer to operate the front and rear brake levers and within the range
of play of the brake levers. 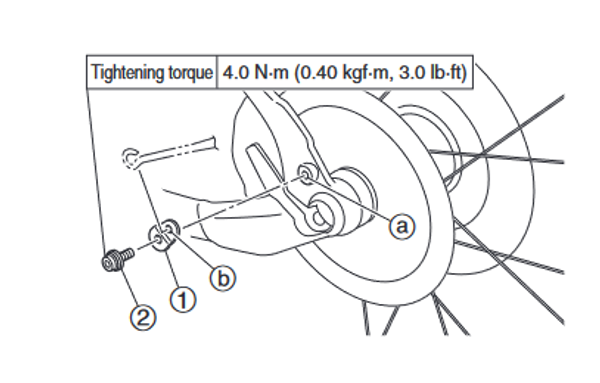 After completing the installation, inspect the items as follows and check that there are no problems before delivering the bicycle. Adjust controls and saddle height to the customer’s satisfaction according to this manual.